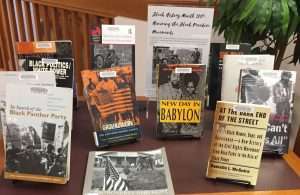 During this month of February, in which we celebrate Black History Month, we hope you have had a chance to check out a display of books based on the works used by  Dr. Yohuru Williams in his latest research. Dr. Yohuru William is the Interim Dean of the College of Arts & Sciences and Professor of History at Fairfield University. Dr. Williams currently researches African American History, Civil Rights/Black Power Movements, African American Constitutional and Legal History, the African Diaspora, and History and Social Studies Pedagogy.

Dr. Williams’ most recent work is concerned with the intersection of the Civil Rights Movement and the Black Power movement in Rethinking the Black Freedom Movement: American Social and Political Movements in the 20th Century. Dr. Williams chronicles the complex, common history of the Black Power and Civil Rights Movements by examining the struggle, focusing on of housing, transportation, education, labor, voting rights, culture, and activism in the 1950s and 1960s.

The book display, located on the main level of the library,  honors Black Freedom Movements from the Civil Rights Movement of the 1950s and 1960s to the Black Lives Matter Movement today. Books on the display include:

In Search of the Black Panther Party: New Perspectives on a Revolutionary Movement edited by Jama Lazerow and Yohuru Williams

They Can't Kill Us All: Ferguson, Baltimore, and a New Era in America's Racial Justice Movement by Wesley Lowery

At the Dark End of the Street: Black Women, Rape, and Resistance—A New History of the Civil Rights Movement from Rosa Parks to the Rise of Black Power by  Danielle L. McGuire.

Rest in Power: The Enduring Life of Trayvon Martin by Sybrina Fulton and Tracy Martin.

Soul Power: Culture, Radicalism, and the Making of a U.S. Third World Left by Cynthia A. Young.

Controversy and Hope: The Civil Rights Photographs of James Karales by Julian Cox with Rebekah Jacob and Monica Karales; foreword by Andrew Young.