Come to the library to check out the scary movie display!

Display is located on the main level just beyond ITS. 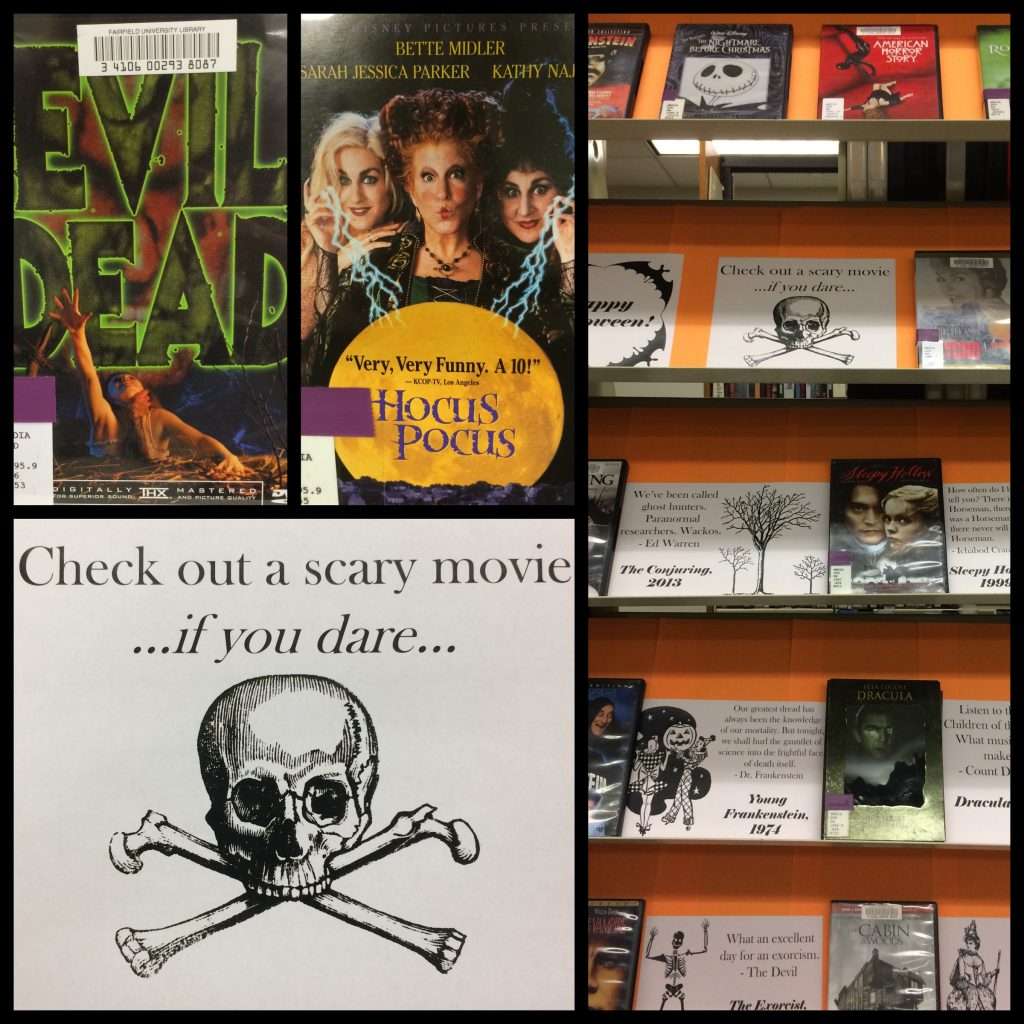 The Blair Witch Project -  PN1995.9 .S8 B523  directed by Daniel Myrick and Eduardo Sánchez, is a noteworthy film to watch in preparation of October 31st. It is deep in the woods of Burkittsville, Maryland, where three students studying film find themselves lost and out of luck. Throughout the film, the students document their reactions to mysterious sounds and strange witchcraft structures composed of rocks and sticks.

Halloween - PN1995.9 .H6 H253  directed by John Carpenter, is known as being one of best slasher films of all time. The setting takes place in Haddonfield, Illinois on October 30, 1978. Laurie Strode, a studious high school student, is convinced that someone is stalking her. Her friends think she is crazy but little do they know that Laurie's older brother, Michael Myers, escapes from a mental institution and returns to Haddonfield to find his younger sister. As a result, Laurie and her friends are watched closely and attacked by Michael throughout this bloody film.

Stanley Kubrick's The Shining - PS3561.I483 S553 was released in 1980 and stars Jack Nicholson as the protagonist named Jack Torrace. The movie takes place in an eerie hotel located on a historical burial site for Native Americans. Jack Torrace is a writer, so he is using the hotel to write his latest work. However, little does he know the future events to come. When applying for the position of the hotel caretaker, Torrace is told that a former worker went psychotic and murdered his whole family. Danny, the young son of Jack Torrace, has a terrible suspicion pertaining to future events at the hotel.

The Exorcist - PS3552 .L392 E963  released in 1973, is a horrific film exploring concepts related to the devil. This film is uniquely different from other movies that fall under the Halloween genre because it was inspired by two demonic possession related cases from the early 1900's. Furthermore, this is a must-see film because it was one of the only horror movies to be nominated for an Academy Award for Best Picture.

The Night of the Living Dead - PN1995.9 .H6 N543  was released in 1968 and directed by George A. Romero. The movie starts off with Barbara and her older brother Johnny visiting their mother's grave site in a cemetery located in Pennsylvania. However, matters worsen when Johnny is attacked by a male figure that appears to be human. However, Barbara escapes to a nearby barn where she meets other survivors that have been able to evade victims of a toxic spill (the zombies). She and her new acquaintances are forced to defend themselves against a tremendously large group of hungry zombies.