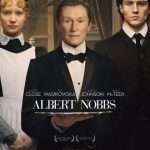 “The Irish in Film,” the free movie series sponsored by the Irish Studies Program at Fairfield University, opens on Wednesday, April 3, with the first of four diverse films. The series, now in its fifth year, is part of Fairfield University’s Arts & Minds season of cultural and intellectual programs.

The series begins on Wednesday, April 3, with “Albert Nobbs” (2011), from Director Rodrigo Garcia.  Albert Nobbs struggles to survive in late 19th century Ireland, where women aren't encouraged to be independent. Posing as a man, so she can work as a butler in Dublin's most posh hotel, Albert meets a handsome painter and looks to escape the lie she has been living. Dr. Pearson will introduce the film.