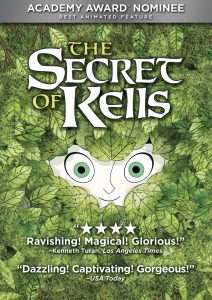 On October 17, "The Secret of Kells" (2010), director Tomm Moore's Oscar-nominated animated film, will be screened. The visually compelling film draws on Irish culture and fantasy, while adhering to the actual history of the sacred text that was first undertaken in St. Columcille's monastery at Iona. Dr. Marice Rose, who teaches Celtic and Early Irish Art, will present the film.