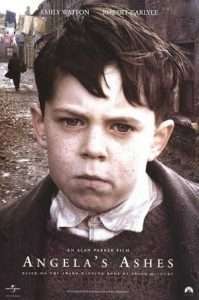 On October 9, the series continues with "Angela's Ashes" (1999), based on Frank McCourt's 1996 best-selling memoir of his early life in an impoverished part of Limerick. Directed by Alan Parker, the movie stars Emily Watson, as Frank's overwhelmed mother, and Robert Carlyle, as the alcoholic father who abandons his destitute family. William Abbott, Ph.D., associate professor of history, will present the film.