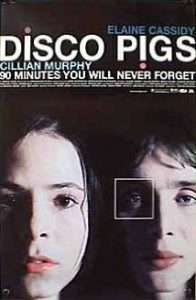 The fall series concludes on October 23 with "Disco Pigs" (2001), a coming-of-age story set in Cork City about two disco-going teens, Pig (Cillian Murphy) and Runt (Elaine Cassidy). Directed by Kirsten Sheridan, daughter of the director Jim Sheridan, the film explores the intense relationship of the inseparable teenagers, who live next door to each other, have their own language, play by their own rules, and retreat into their own dangerous fantasy world. The film will be presented by Robert Epstein, Ph.D., associate professor of English.