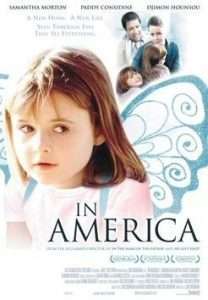 "In America" (2002) features a family of Irish immigrants who arrive in Manhattan illegally by way of Canada. Directed by Jim Sheridan, and written by Sheridan and his daughter Naomi Sheridan, the film will be screened on October 16. It stars Paddy Considine, the young father who aspires to become a stage actor, and Samantha Morton, as his wife. The couple's two young daughters are played by Sarah and Emma Bolger. Novelist Mary Pat Kelly, author of "Galway Bay" (2009), and screenwriter Naomi Sheridan will present the film and the engage the audience in a Q&A.