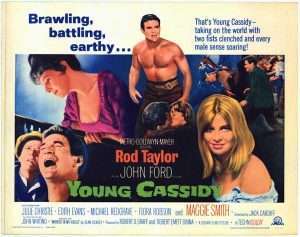 The series begins on Wednesday, October 2 with "Young Cassidy" (1965), based on the autobiographies of Irish playwright Sean O'Casey (1880-1984). Directed by Jack Cardiff, the film stars Rod Taylor, as a self-educated, working class Protestant, involved in political activities, who lives with his widowed mother in a Dublin slum, while struggling to become a writer. Filmed in Dublin, the film includes enactments of the 1916 Easter Rising, and the Abbey Theatre riot over O'Casey's first critical success, "The Shadow of a Gunman" (1923). The film also features Julie Christie, Maggie Smith, Michael Redgrave and Edith Evans. Nels Pearson, Ph.D., who teaches 20th Century Irish Literature, will introduce the film.