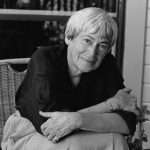 Last night, the National Book awards had its 65th anniversary with Ursula K. Le Guin as the winner of The National Book Foundation's Medal for Distinguished Contribution to American Letters. Guin was born in 1929 in Berkeley, California and is recognized for her focus in the genres of science fiction and fantasy. This is her second time receiving the National Book award (the first time was back in 1973). This award is unique because it credits selected authors for their openness about their history and style of writing.

The DiMenna-Nyselius Library has  27 books  by Le Guin which are available for checkout, see the catalog.

In her  acceptance speech, Le Guin speaks about the recently resolved pricing dispute between Amazon and the publisher Hachette Book Group. "We just saw a profiteer try to punish a publisher for disobedience, and writers threatened by corporate fatwa," she said. "And I see a lot of us, the producers, accepting this — letting commodity profiteers sell us like deodorant!" Here all of her speech below: