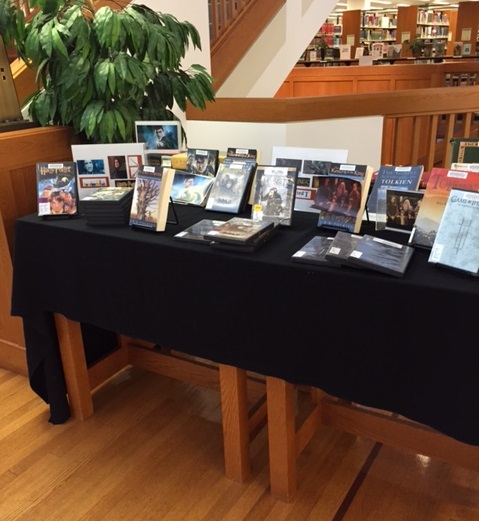 Do you remember watching or reading epic series such as J.K. Rowling's Harry Potter or J.R.R. Tolkien's Lord of the Rings ? If so, prepare for the spooky month of October by checking out some of these classics on the display table on the main level. George R.R. Martin's "Game of Thrones" series is also highlighted there!

The Lord of the Rings series tells the journey of Frodo Baggins and his quest to destroy the "one ring that ruled them all"! Author J.R.R. Tolkien wrote the trilogy, which follows The Hobbit book.

So many of us love Harry Potter! This series focuses primarily upon protagonist Harry Potter's adventures in the magic school of Hogwarts as he learns the ins and outs of witchcraft and wizardry in the classroom and fights evil spirits known as Voldemort on his time away from his studies. You might have heard that J.K. Rowling wrote some of these critically-acclaimed fictitious stories in cafes scattered across Scotland!

The "Game of Thrones" series may be the most well-known series to a vast majority of college students, with the praised HBO show airing Sundays. Martin's tales are similar to those of J.R.R. Tolkien's, because they involve kings and queens. But in these epic tales, they are battling for power of the most renowned mythical kingdoms in medieval times.

To see what we have for you to check-out: