The American Scholars of Religion Video Project has added a new scholar to its collection.  You can now view video clips of Sister Margaret Farley,  who has been accused by the Vatican of publishing a book  Just love : a framework for Christian sexual ethics  that poses “grave harm” to the faithful. Read more about the denouncing here. 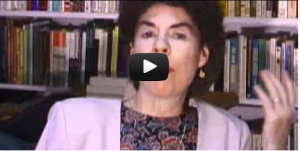 The American Scholars of Religion Project, begun in 1998, is a video oral history; it is a collection of short commentaries or vignettes that preserve and illustrate the thinking and scholarly personality of a diverse sample of American scholars of religion. In these video clips we can watch a scholar at work and come to understand that scholarship is often the struggle to understand the question rather than posit an often simplistic answer. The collection represents a wide range of scholarship in America on the topic of religion at the beginning of the twenty-first century.

This video project is ongoing; completed videos will be added regularly and new videos continue to be created. This video project was conceived, created and produced by Dr. Alfred Benney. Dr. Benney is a Professor of Religious Studies at Fairfield University.

Previous Archivist and Detective Elise Bochinski Next In a Relationship: College Students and Their Smartphones