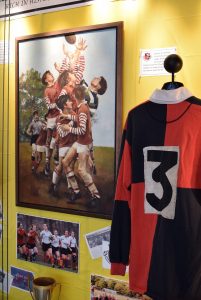 Founded in 1963 followed by women’s rugby in 1994, the Fairfield University Rugby Football Club (FURFC) has played an important role in the athletic, social, and cultural lives of students at Fairfield University for 54 of our institution’s 75 years.  The DiMenna-Nyselius library’s latest exhibit FURFC – Rich in History, Still Going Strong!  highlights the long and distinguished history of the oldest sports club on campus, and is a fitting capstone to our 75th anniversary celebrations.  With video, photographs, narrative and memorabilia from our men’s and women’s teams, the exhibit strives to express the club’s traditions of excellence, camaraderie, athleticism, and joyful spirit of competition in a way that we hope makes over 1400 FURFC members proud, sparks interest in visitors to the exhibit, and inspires current students to join the club or become supporters.

This exhibit was curated by Chris Galvin ’72, Fairfield University Athletics Hall of Fame ’91, and University Archivist Elise Bochinski.  Many, many thanks to those who contributed their memorabilia, photographs, and time to this informative and entertaining exhibition.

Previous LGBT History Month Next Human Library This Wednesday! Be part of the solution!