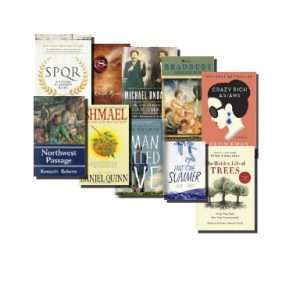 Summer is upon us and the library staff have recommended a few summer reads. Ranging from historical fiction to science non-fiction, the staff have selected something for everyone. Come visit the main level of the library, where you’ll see the books on display, and check one out with your StagCard. Here are some highlights:

Sylvia Hurlburt: Crazy Rich Asians by Kevin Kwan is a hilarious depiction of the clash between old money and new money as three super-rich Chinese families enact a storm of drama when the heir to one of the most massive fortunes in Asia brings home his ABC (American-born Chinese) girlfriend to the wedding of the season.

Mat Blaine : The Collected Works of Billy the Kid  by Michael Ondaatje is a funny yet terrifying depiction of history and myth through the fictional character William Bonney a.k.a. “Billy the Kid,” and his collage of poetry and prose, layering of photos, illustrations and “clippings.”

Nina Peri: The Importance of Living Yutang Lin is a witty antidote to the dizzying pace of the modern world through classic Chinese philosophy that reminds readers to savor life’s simple pleasures.

Christina McGowan: Dandelion Wine by Ray Bradbury tells the story of a magical, timeless summer in ‘28 in the life of a twelve-year-old boy named Douglas Spaulding remembered forever by the incomparable Ray Bradbury.

Sharon Sparkman: The Hidden Life of Trees by Peter Wohlleben shares the authors deep love of woods and forests. Through the fascinating subject of the science behind the unknown life of trees, readers learn how they communicate like human families.

Here are all the other books hand picked by the staff:

BooksBooks and Authorsexhibitrecommended reading
Previous Films that will Transport you Places! Next Pride Month at DNL