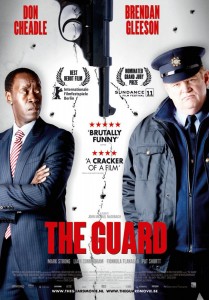 On October 24, the final film of the fall series is "The Guard" (2011), directed by John Michael McDonagh, and starring Brendan Gleason as Sgt. Gerry Boyle. Set in Galway, the film concerns international drug dealers who have invaded the area causing the FBI to send an agent (Don Cheadle) to take care of business. Dr. Robert Epstein, associate professor of English, will introduce the film.