On September 17, 1787, the most influential document in American history was signed by the Founding Fathers: the United States Constitution. The document established our governments framework and the rights and freedoms that “We the People” enjoy today. In 2004 Senator Robert Byrd lobbied for a bill designating September 17 as the day for citizens to commemorate the signing.  In the bill a clause mandates the teaching of the Constitution in schools that receive federal funds, as well as federal agencies.

On Friday the 15th, to honor Constitution Day, 186 students showed up to the library to watch a film about the Constitution and the Bill of Rights. Free Constitution pocket-sized books were given out and students were encouraged to pick an amendment or article that resonated with them and copy it on a large scroll of paper. Some added their thoughts and comments to the scroll, which is now hanging in the lobby of the library. 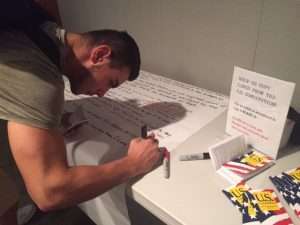 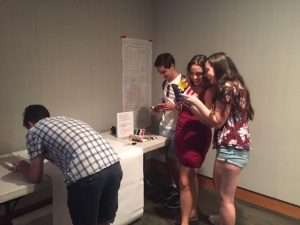 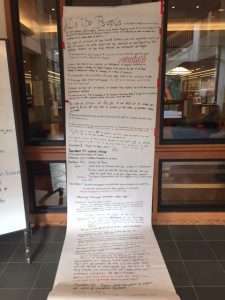 Previous HUMAN LIBRARY: Volunteer to be a “BOOK” Next Banned Books Week 2017