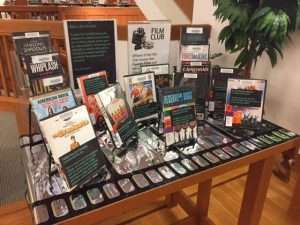 Oftentimes the Library collaborates with clubs and organizations on campus to create interesting displays of library collections. The latest club collaboration is with the Film Club. Officers of the club compiled a list of their favorite films, which are displayed on the main level of the library. Check one out today with your Stagcard. Each movie comes with microwavable popcorn!

The Film Club is a group of movie lovers on campus and provides "a place for Fairfield University students to watch movies based on a rotating theme voted upon by club members. Screenings are typically bi-weekly with special events and movie marathons scattered throughout each semester." Join by logging onto your  OrgSync account and searching for the Film Club under Organizations, or click here: https://orgsync.com/126620/chapter

The Film Club officers and their advisor share some of their favorite flicks, and why:

If your club would like to collaborate with the lbrary on a display or event, please contact Lisa Thornell, Student Engagement & Outreach Librarian at lthornell@fairfield.edu or ext. 2138

Previous Event: Fake News! Media Skepticism and Democracy in the Digital Age Next Baseball is Back!