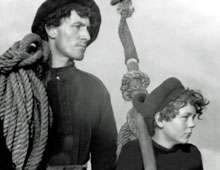 The October 10 film is "A Boatload of Wild Irishmen" (2011), a documentary based on the films of the Irish American filmmaker Robert Flaherty (1884-1951). Flaherty is best known for "Man of Aran"(1934), which depicts the life of the islanders and their heroic struggle for survival in the harsh environment off the coast of Galway. Though it was considered an authentic portrayal of the Aran fishermen for many years, documentary director Mac Dara O'Curraidhin and writer Brian Winston reveal how Flaherty staged much of the film. Dr. William Abbott, associate professor of history, will present the film.