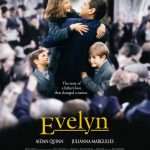 “The Irish in Film,” the free movie series sponsored by the Irish Studies Program at Fairfield University, opens on Wednesday, April 17, with the third of four diverse films. The series, now in its fifth year, is part of Fairfield University’s Arts & Minds season of cultural and intellectual programs.

The series continues on Wednesday, April 17, with “Evelyn” (2002).  1953, Desmond Doyle is devastated when his wife abandons their family on the day after Christmas. His unemployment and the fact that there is no woman in the house to care for the children, Evelyn, Dermot and Maurice, make it clear to the authorities that his is an untenable situation. Dr. William Abbott will introduce the film.