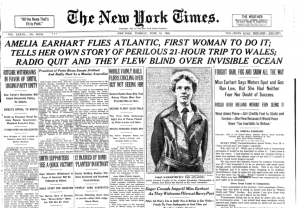 The first female pilot to fly across the Atlantic, Amelia Earhart set incredible feats as an aviator. Of the countless record-breaking flights she navigated, she set the highest Women’s World Altitude record in 1922,  was the first person to fly the Atlantic twice in 1932, and was the first person to fly solo between Honolulu Hawaii and Oakland California in 1935. She was critical to the formation of the Ninety-Nines, an international organization for female pilots.

Check out the New York Times Historical database through access to the DNL for more newsworthy accomplishments she set!

You can watch the A&E film Amelia Earhart:Queen of the Air here.

Check out her print book Last Flight, originally released in 1937; this book was compiled after her disappearance by her husband George Palmer Putnam from her letters, diary entries, notes and pilot's logbook.

Previous The Afterlife of a DNL Dust Jacket Next NY Times and Wall St. Journal Access