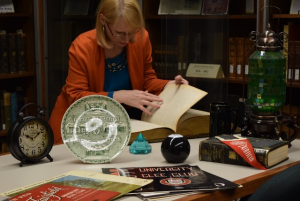 Here at the DNL, our Archivist Elise Bochinski is  privy to some really interesting facts about Fairfield U, so for #AskAnArchivist Day, we asked her what the top 5 questions she receives are. Here's what she had to say:

Q: When was the University founded?

A: The Jesuits established the “Fairfield College of St. Robert Bellarmine” as a corporate entity on March 17, 1942 – that’s right, St. Patrick’s Day.  This means we have a birthday coming up in 2017 – our 75th Anniversary!  Stay tuned.

A: Fairfield University was established as an all-male Jesuit college, growing as it did out of the all-male Fairfield Preparatory School.  Women were a part of campus life in the early years, but not as full-time students.  In the 1950s, women were admitted on a part-time basis to the Graduate School of Education and local nursing students took some undergraduate courses as well.   Women were typically a big part of campus social life, with young men inviting their dates for dances and other events.  It might be of interest that in the early days, some of our graduates were veterans studying on the G.I. Bill, and were already married; when their husbands graduated, the wives received an honorary certificate as well!  Fairfield University went co-ed in 1970 with the establishment of the School of Nursing, and officially admitted women students to all undergraduate programs at that time.

Q: Do you have any pictures of the New York Giants?

A: So you know about that, do you?  The New York Giants football team regularly held their summer practice at Fairfield University on Alumni Field (locker rooms were in Loyola Hall) from 1961 through 1969, and also in 1974.   We have one press release, but other than that – no, we don’t have any candid photos of the NY Giants on campus.  Do you?  If you do, can you send us copies?

Q: Did the Grateful Dead ever play on campus?

A: No.  Neither did the Doors, although the Doors were scheduled to play at Fairfield in May 1970; the concert was cancelled by the administration stemming from concerns over possible crowd disturbance.  Concerts back in the day typically took place in the bandshell on Alumni Field, the “gym” which is now Alumni Hall, and sometimes Gonzaga Hall auditorium.  So, who did play here?  The Kingston Trio, the Beach Boys, the Byrds, the 5th Dimension, Ray Charles, Billy Joel, and many others.  Now the Quick Center plays host to a variety of cultural events, and all kinds of music.  And let’s not forget our own homegrown band – the Alternate Routes.

Q: Where do I go to look at the yearbook from…. (insert date here)?

Thanks Elise! If YOU have a question for her, feel free to email her today or any day at ebochinski@fairfield.edu