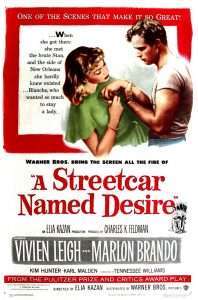 On October 24, Marti LoMonaco, Ph.D., professor of theatre, will present “A Streetcar Named Desire” (1951), the searing Tennessee Williams play brought to cinematic life by director Elia Kazan. The film stars Vivien Leigh as the troubled Blanche DuBois, Kim Hunter as her sister Stella, and Marlon Brando as the brutish Stanley.