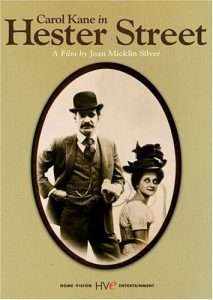 The series concludes for the fall semester on December 4 with “Hester Street” (1975) presented by Ellen Umansky, Ph.D., Carl and Dorothy Bennett Professor of Judaic Studies. Set in 1896, the film follows Steven Keats as a Russian Jew who emigrated to the United States and has settled on the Lower East Side of New York City, working as a seamster to raise money to bring his wife, played by Carol Kane, and his son to America.