Wonder Woman at the DNL! 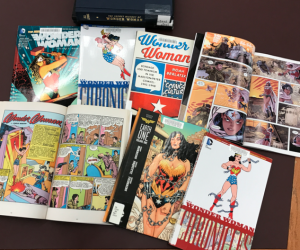 In lieu of the new Wonder Woman film starring Gal Gadot and directed by Patty Jenkins, the DNL is inviting students, faculty and community members to utilize the diverse form of resources we have on the groundbreaking superheroine.

Check out our collection of items on Wonder Woman, including streaming videos, ebooks, print books, graphic novels and journal articles.

“Diana Price”, better known as Wonder Woman, flew into existence in 1941 by creator William Moulton Marsten. An Amazonian princess originating from an island of women who lived apart from men for centuries, she landed in the U.S. to battle injustice and gender inequality. Her civilian disguise, a secretary named Diana Price, was made for the purpose of working in the U.S. military intelligence. Sculpted from clay by her mother Queen Hippolyta and given life by Greek goddess Aphrodite, she exists for and by the empowerment of women. An intelligent, strong, and beautiful superhero, Wonder Woman offers young girls and boys a role model for peace, justice and women’s rights.

The Secret History of Wonder Woman by Jill Lepore

Wonder Woman: Bondage and Feminism in the Marston/Peter Comics, 1941-1948 by Noah Berlatsky

Wonder Woman Unbound: the Curious History of the World's Most Famous Heroine by Tim Hanley and Johnathan Hahn

The ages of Wonder Woman: essays on the Amazon Princess in changing times by Darowski, Joseph J

“Lasso of Truth”: Rediscovering the Forgotten History of Wonder Woman by Irena Jurkovi?

The Search for Wonder Woman: An Autoethnography of Feminist Identity by Paige Averett