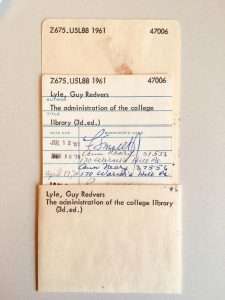 In exciting library news, librarians have found a date due slip signed by Father Small, the first Director of Libraries here at Fairfield University, from July 1961. He was the first person to check out a copy of the book The Administration of the College Library 3rd Edition by Guy Redvers Lyle, as you can see from the slip in the book pocket.

Rev. Francis Aloysius Small, S.J. was named Director of Libraries in 1952 when the library occupied two rooms in Xavier Hall. He led the move to the main floor of Canisus Hall in 1957 where the library remained until the Nyselius Library opened in 1968. It was under the leadership of Father Small that the library began a microform collection, purchased its first electronic typewriter, and developed a procedure for duplicating catalog cards. Father Small remained the Director of Libraries until 1974.